There are a lot of tools & gadgets available for the Arduino platform. One of them that is gaining interest is the Nextion TFT screens. Small TFT screens with resistive touchschreens and an editor to build the screen layout. These screens have their own intelligence taking away the burden of self programming TFT screens. However on the other side (i.e. Arduino) still needs to know all the components used on the screen to be able to communicate with them. So there is still quite some coding to do.

The Nextion Editor works with a project file (.HMI type) that contains all the information that is later compiled and flashed on the TFT screen. It contains all the possible components the screen supports and each component is capable of sending events when touched and released. There is also a debugging facility available that enables some simulation.

The project file contains everything we would need to generate the code. After all if we open the HMI file in the editor, all the objects, layout, events etc are shown. So why not hack the HMI file to get al the data from the HMI file and generate all the required code for the Arduino Sketch. So in general the flow would be: 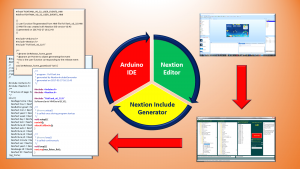 As you can see in the diagram there is defined the Nextion Include Generator. It is actually more than just in .h generator. The current version will generate all code for the Arduino into a working sketch. All the definitions, callbacks and nex_listen_list are generated. But als (if requested a working sketch). I am using a decoupling mechanism to decouple the callback functions. Why? I we were to regenerate all callbacks would be replaced. So the callbacks call a user function (OnRelease.. and OnPush..) which is put in a separate .ino file. The user should edit these user functions and not the callbacks themselves. 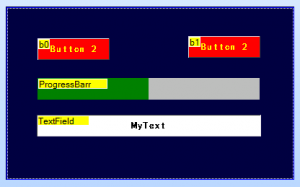 Save this file and now it is time to generate our code.

I developed an application (using Code::Blocks and wxWidgets) that can read our HMI file and generate the code for a complete Arduino sketch. Below is the main (and only screen) that controls the whole generation process. When you start it the first time, It will complain about a missing settings file. This correct. It will be generated automatically. Once the display shows, go to Settings->Program settings. This sets some parameters for visualization, Arduino sketch folders and Postfix or Prefix settings with structure names. 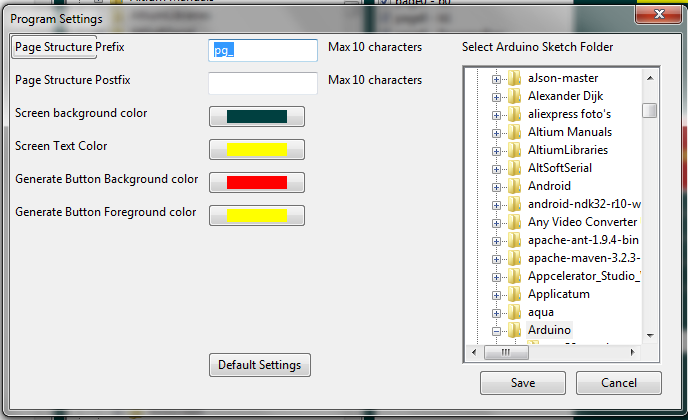 Page Structure Prefix: When a structure is generated, this text will be put in front of it

Save will make the changes permanent. Cancel or X will leave all unchanged.

Below is a typical screen from the program. In this case set to our example. 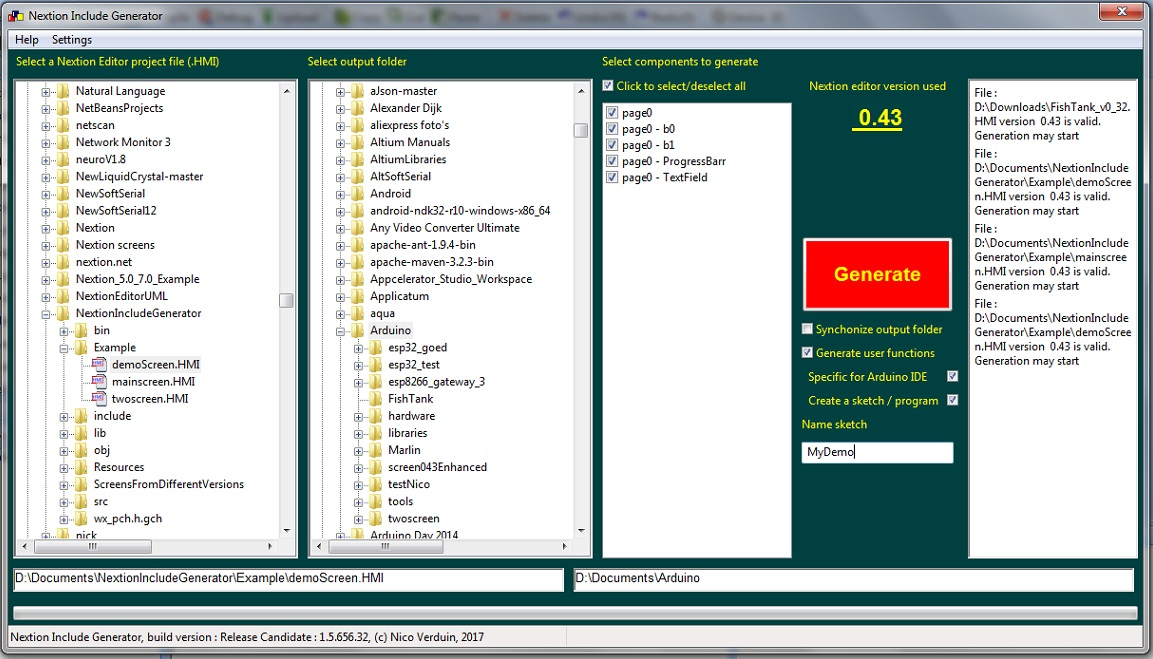 On the left there is a filtered treeview showing only the folders and possible HMI files. If a HMI file is selected it is validated as an HMI file (made with Nextion Editor >= version 0.38). also in column 3 all the objects that the HMI file contains are shown.

The second column is the output folder. If the checkbox “Synchronize output folder” , the treeview will follow the input treeview. Any folder may be selected. Realize though that using the checkboxes on the screen, this may automatically change.

If valid conditions are set, code files are generated. For this example the following code is generated in the Arduino sketch folder. Also a folder is created with the same name as the sketch. According to the Arduino IDE specifications.

Let’s take a closer look that the generated code of  our .h file.

The next file is the userEvents. UserEvents are called from the callback functions so that we can decouple functionality from generated code. For the arduino wet get in the case of our example, the following code:

As you will notice, only the HMI objects that actually generate an event will have a userEvent.

And finally the sketch:

I use SoftwareSerial for the communication with the Nextion screens. This can be set in NexConfig.h within the library.

With the generated code, a complete sketch is made without any coding at all.

The .HMI file is propriety and this makes it difficult to foresee the future as far as versions are concerned. The current build can execute HMI files from  V0.38 up to V0.43 (current version). Should the layout change I will try to fix it for future versions as well.

The project is in final testing stage. I have some testers around the globe who are testing the product. Most changes/defects now are from a cosmetic perspective.